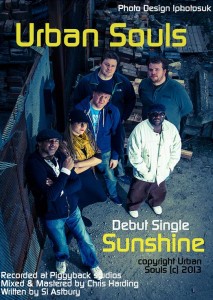 Si Astbury and the other five members of the Urban Souls band reside in the UK, but their latest song can reside in anyone’s home around the world!

“Sunshine” is Urban Souls’ debut single. The band’s six members are from UK’s Midlands, and they include Astbury, April Davies, Graham Parkes, Geoff Caruthers, Matthew Linney and Craig Henshaw. They are supported by Keith Mawbey and Dean Gaunt.

“Sunshine” was recorded at Piggyback Studios, engineered and Produced by Chris Harding